Thanks to the EA Game Changers Network we got the opportunity to review The Sims 4 Island Living with an early access review copy. In this review we will cover living on the island Sulani, mermaids, the new jobs and CAS and Build/Buy.
Some of these we have covered already in the live stream preview we got to see 2 weeks ago, which you can read more about here
The Sims 4 Island Living will release Friday June 21st 2019

First off, I just want to say, what a gorgeous world! That’s not really an unopinionated observation, but I just had to get that out of the way.

There are 3 neighbourhoods in Sulani, with each its own little story

Ohan’Ali Town – This is the town and the neighbourhood with the most lots, 6. It has a few lots on the water, and a few that are regular lots.
Mua Pel’Am – The natural island. Home to the waterfall, but also in need of some cleaning. It has only 3 lots, but none have residents.
Lani St. Taz – The true tropical island feeling is here, the white beaches, the clear water (although all of them have clear water). It’s idyllic place to live, or leisure.

The expansion pack also has a theme of (ocean) clean up. Especially in the neighbourhood Mua Pel’Am, you will find garbage on the beach and in the water. You can either choose to clean this up, or not do anything. Both have consequences.

If you decide to clean the rubbage up, the island will slowly start to improve. And the habitat of the island will become more and more alive.
More fish, flowers start to bloom. And also, the elementals will be happy with you. You might even get to see some

I didn’t try to make it worse of refrained from doing anything, as I didn’t have enough time to try both extremes. But if you neglect the island, the elementals will not be happy with you, and there might be consequences for that too.

Each time you go up a level for conserving the island, you will get a message about it.

Most of the build/buy items are Polynesian themed and have that typical island vibe. Perfect to create that get away house on the beach.
There are a few sofas, chairs, 2 4 tile sliding doors, a semi single tile sliding door (still takes up 2 tiles, because it has to slide somewhere of course).
Something they did think about this time, and that’s great, is the thatched roofs, they actually get some depth, when you select the matching roof trim.

There as also a whole lot of “debug” items, not even covered here. Highly suggest to rummage through there if you are familiar with debug.
You can get there by opening the cheat box (CTRL+SHIFT+C) enter “Testingcheats on” and when it says cheats enabled, enter: “bb.showhiddenobjects”
This will enable you to search for “debug” in the search bar, to see ALL the hidden objects.

Because I am mainly a builder in the game, I had to try and build something on the new water lots. They have been uploaded to gallery as well.
A little starter home Lagoon Blue – Starter

And a larger family house over the water as well. Key Point Bungalow

Create-a-Sim got a whole range of new clothing and accessories. As always, the most stuff is there for female Sims. But male and kids weren’t entirely left out this time either.
To get a complete view of this, we think it’s better to make a post just for CAS. Because if I will list everything here, that would make this post way too long, or it wouldn’t do it justice.
You can also create a new occult in CAS, there are 4 tails to choose from, and besides regular (bikini) tops for females, there are only 2 mermaid scale tops.

There are 2 new traits and 1 new aspiration.
Child of the Ocean – With this trait your Sim will be happiest when they are in the water, or on the water. They don’t like to hurt sea life, so if you go fishing, they will become sad for hurting the fish, and if they see mounted fish on the wall, will also give them a sad buff 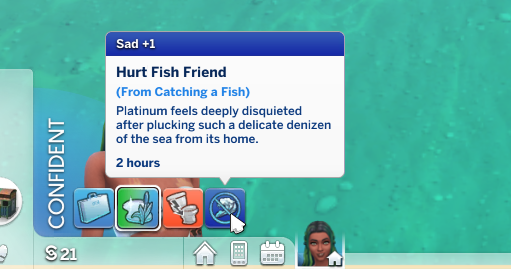 Child of the island – Sims who have this trait are more in touch with the island, and it’s spiritual connection. They can call upon the elementals, which will trigger a short event (similar to the welcome wagon) where the spirits of the island will come.

And the new aspiration Beach Life, which is under location aspirations.

The Sims 4 Island Living offers a lot of new game play.
One of the major ones if of course Mermaids. But there are also new traditions to discover, events to visit, new careers, and new activities.

Most of this topic has been covered in our preview post, but there are now a few little details I want to share.
One way to get a mermaid is to create one off the bat in CAS. But if you want to play through it and your Sim has to become a mermaid, that’s possible too.
You have too look for special kelp. For this review I have cheated and used the Debug items for it. The kelp is called Mermanic Kelp and if your Sims eat it, and get into the water. They turn into a mermaid, just like that. The hard part is, finding the kelp 😉

Mermaids are by far the fastest swimmers. They are from one side to the other in now time.
They also have more benefits of course. They get dolphin friends more easily, they can call upon fish and they can sleep and sunbathe in the water.

They can’t snorkel though, because, what mermaid would want to, they are sea creatures themselves!

I didn’t manage to cover a whole lot of the new careers. So we will need to write a separate post for those.
What I did get to test out is that with the new part time jobs for adults, (and the other enabled previously teen part time jobs) you can have 2 jobs at the same time. So you can be a scuba diver and a fisherman at the same time. Or a life guard, or one of the base game part time jobs.

But there is also a new full time career, you can’t do a part time job next to this one. The Conservationist.
It has 2 branches you get to choose from when you advance to level 5 of the career, marine biologist and Environmental Manager.

There is a new event – the kava party! Kava seems to be an island beverage which, if consumed to excess, apparently causes “EXTREME. RELAXATION.” We haven’t had a chance to actually throw a kava party yet, but we look forward to figuring out just what that means!

Living on an island means there will be lots of fish, so I’m glad to see that The Sims 4 Island Living there are a whole bunch of new species of fish added to collect. But that is not all, there are now more than one way to catch fish.
you can fish from a boat, you can fish with a trap and if you’re playing with a mermaid, you are more in touch with the ocean life, you you even get to call on more fish with an interaction.

Because the water on the island is crystal clear, you can actually see the fish swim at the fishing spots. But you can also see them swim all over the world in the water. Those fish can’t be caught though, they are just pretty to look at.

There are a lot of new fish to discover on the island and some are even illegal to catch! When you catch one of those fish, you get to option to either break the law, and catch it anyway, or release the fish back in the water. If you release the fish, it will still count for you collection.

There are a few buoys scattered over Sulani. At these buoys you can either snorkel (in the shallower waters) or dive (in deep waters). It’s the same type of buoy, but where it is tells you if you can dive or snorkel.

Snorkeling can be done by every Sim that can swim, except for mermaids, because it’s beneath them.
Your Sim doesn’t need any fitness level for it to start snorkeling. Diving however is unlocked at fitness level 3. And free diving is free to do. If you want to take under water photos or have extra diving gear, you can buy those at the buoy.
Diving is a rabbit hole activity though, so you can’t join your Sims to the under water world. The pictures Sims can take are similar to the pictures that Sims can take in the telescope. There is a certain collection of prints you can ‘make’/find.

You also meet the dolphins at these buoys. They appear twice a day, at set times. The buoy in Ohan’ali town, in front of my Sims house, had them appear early in the morning (at 6am) and later in the evening.

Sometimes you can also find shells just laying on the sand. And the big shell, you can even use to blow on it! Maybe you will even draw a mermaid near.

As for harvestables, there are 4 new kinds to add to your gardening journal. Coconut, Kava shrub, Taro root and pineapple.
I found all 4 in the world of Sulani, but I couldn’t harvest them all, as I also have The Sims 4 Seasons installed and I found them in the wrong season.
We will update the harvesting guide as soon as possible with these new harvestables.

Not only does this pack bring a lot of new items to your game, it also brings new gameplay, and lots of it. I couldn’t do more than scratch the surface of some of it in this short amount of time, so expect more in depth on those later. (CAS, Careers, Conservation and island culture) As well as how this pack interacts with other packs already released for The Sims 4.
Overall, I think this pack offers a lot of great content, and the world is just stunning. At the beginning I just kept taking screenshots of yet another beautiful area I saw.

Hopefully you found this review helpfull, if you miss any information or have any questions still, reach out to us in the comments, or on Twitter @PlatinumSimmers