In each Sims game to date, once you figured out the most efficient morning routine, every morning before your Sims’ work you would use the same options. It was predictable story lines and (in theory) every day is pretty much the same. I’ve been working on a few “Let’s Play” series (coming soon) and can see that this is completely true.

In the Sims 4 the Sims will now have emotions, giving some unpredictability to the game. Sometimes, your Sim will just wake up grumpy (admit it, that happens to you too in the real world). This will change the interactions and possibilities you will have that day.

Until now, if your Sim was in the “red” mood area, it meant you were doing something wrong and you had to fix it. This has changed a lot, Sims with a bad mood will actually give you additional gameplay you cannot get in a good mood (and the opposite is true). See it as playing a different part of the story, you could go with the flow and get your Sim in an even more negative mood (and see what gets unlocked) or you could try to get them to a better mood again.

Several times during the presentation, we saw that there was a certain amount of time on the emotion. This means that in 6 hours, for example, their mood would take one step towards “neutral” – e.g. they would go from depressed to just sad, or from happy to neutral.

It’ll be interesting to find out how hard it is to get to the happiest, flirtiest and saddest state my Sim can get to! I hope it’ll be difficult will present a new challenge to players.

Your Sim’s mood will limit the interactions available to them. For instance sad/depressed Sim cannot flirt but if they paint, they can paint a different painting than when they’re happy. An angry Sim wants to take a cold shower instead of normal shower. During our presentation there was a lot of emphasis on sad/depressed interactions so I had to ask what a positive one was. The answer? Confident Sims can ‘pee like a champion’. It seems the game isn’t short of the famous Maxis humour! 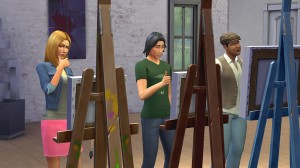 A Sim’s emotional state has a direct effect on their skill building. Angry Sims are more effective when learning the athletic skill. Inspired Sims can paint better paintings. However a Sad Sim might make a broody painting that turns into a masterpiece (after all, Van Gogh wasn’t exactly the happiest chap around).

In something completely new to the Sims series, a Sim’s emotions will affect the way they look and walk. A sad Sim will be slumped forward and walking slowly, at times you might spot a quivering lip. An angry Sim stomps around with clenched fists.

Paintings in a room can also influence on your Sim’s emotional state. In the gameplay video we saw a risqué painting that’ll put your Sims in a flirty mood. There are also some anger-inducing paintings – great for a gym, or an angsty teen’s bedroom.

We saw moodlets, but they are very different from we’ve seen previously in The Sims 3. They are more like enhancements to the current emotional state. As I mentioned earlier, an emotional state is temporary – but a moodlet can extend it. For instance the risqué painting can cause or extend a flirty mood.

Personally I am very happy with wishes, wants and fears from previous Sims games. I used them as my goals or challenges when I played The Sims. However in The Sims 4, these systems have been removed and there is a different long-term goal system. In Create-A-Sim there is an option called ‘primary aspiration’. This could suggest there will be secondary and maybe even tertiary aspirations in the game.

We don’t know anything more about this for now. However, when I expressed to @SimGuruGrant that I enjoyed playing The Sims when I had goals to achieve, he told me ‘you will be happy with it’. Personally, I can’t wait to find out what he meant by that, and hopefully we’ll see something related to that soon!

In The Sims 4 there will be less deaths by random events (meteor), and instead, Sims will tend to die either of old age, or of things you caused. Extremes of emotion may lead to an early death. If your Sim was almost constantly very angry, they could die from that – comparable with a heart attack in real life, perhaps. But being constantly very happy could also cause your Sim to die from happiness! Too much of a good thing, I guess.

As for other deaths… drowning… electrocution… well, just think about this one:
If your Sim dies from electrocution is that really a “random” death? Or should you have made them study up a bit before repairing the dishwasher…?

We were not told what all the Skills in the game, but just got hinted at a few of time. Gardening is still in the game, emotions are tied into it and we were told we would be happy with how that works. Woodworking, athletic and painting were other skills we saw or were mentioned. I wonder what interesting things a Sim with the woodworking skill could make. There are also instruments but I forgot to ask if they are under a single “music” skill, like The Sims 2, or separate per instrument, like in The Sims 3.

There is also a cupcake machine which I assume will be part of the cooking skill (or career?).

There will be branched careers, though we don’t have any more information than that for now. This could be like in The Sims 3 with the music career splitting into classical and rock star, or it could be something new.

I’m pretty intrigued by the emotional gameplay The Sims 4 is introducing. It makes the Sims feel more real. Emotions do influence our daily life, and it’ll be interesting to see emotions influencing our Sims too! However, what we saw was a small glimpse and I do not have a full understanding yet how the gameplay will differ from one Sim-day to the next.

For me, I think it’s really important to separate this game in my mind from The Sims 1, 2 and 3, at least to a certain extent, and see it for what it is: a completely new game, with completely new experiences. So I think it’s important not to obsess over what things we will be “missing” from The Sims 3 and all its expansion packs. We’re not “missing” anything, it’s a new game, it’s built on a totally new engine, and it sounds like the gameplay will be very different. Personally, I can’t wait to play it!

What are all the skills?

What are some of the traits?

Where and how will Sims work?

Will there be self-employed Sims?

Leave a Reply to sww X